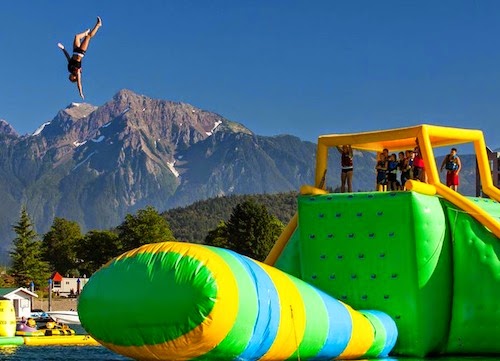 Yup, it is a floating water park and is a potential new activity for Whistlerites and Visitors alike, pending 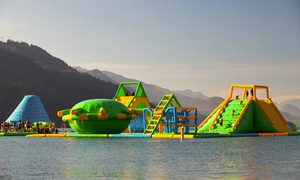 approval from the Resort Municipality of Whistler.

Maybe I’ve led a sheltered life as I’ve never heard of an inflatable water park and Whistler could potentially get Canada’s Largest?

Comprised of massive inflatable structures in the shape of teeter totters, trampolines and climbing walls floating on the crystal clear waters of one of Whistler’s lakes. Whistler Water Park is looking to be approved and open for summer of 2015.

“It’s an open concept for anyone to enjoy, and the greatest thing about it is that it’s modular, so you could actually change the shape and orientation of the park,” Alex Campbell, one of the men behind the project is thrilled abut the response of the Whistler public, “Everybody seems to be so excited, everyone seems to want to get out on the park,” “People have been asking whether season passes are available and things of that nature.”

As Campbell wrote on the Whistler Water Park website, “Our goal is to create one of, if not the largest park in Canada or even the world! Whistler has a world renowned reputation that we intend only to make greater!”Since it launched July 2 the facebook page, Whistler Water Park confirmed the locals’ approval of the Park, getting 800 likes and more than twice the page views. What a great idea and another option for Whistler Summer Activities, you can like it too, if you want to be slip sliding your way into one of Whistler lakes next summer!

Here’s a video posted on the Whistler Water Park website of another inflatable water park in Canada.

Cheap or luxury, studios to mansions… for way less than a hotel on www.Whistler.ResortAc.com